The current definition of pain includes the words “unpleasant sensory and emotional experience” so we would be surprised if we encountered a person with pain who wasn’t feeling some sort of negative emotion, am I right? Yet… when we look at common pain assessments used for low back pain, items about emotions or worries are almost always included as indicators of negative outcomes (for example, STarTBack – Worrying thoughts have been going through my mind a lot of the time, I feel that my back pain is terrible and it’s never going to get any better, In general I have not enjoyed all the things I used to enjoy). And while the screening questionnaires have been validated, particularly for predictive validity (ie higher scores obtained on these measures are associated with poorer outcomes), I wonder how much we know, or think we know, about the relationship between emotions and pain. Perhaps its time for a quick review…

Firstly, let’s define emotions (seems easy!) “Emotions are multicomponent phenomena; (2) emotions are two-step processes involving emotion elicitation mechanisms that produce emotional responses; (3) emotions have relevant objects; and (4) emotions have a brief duration.” (Sander, 2013). There are thought to be six evolutionarily shaped basic emotions such as joy, fear, anger, sadness, disgust, and surprise (Ekman, 1992); but as usual there are complications to this because emotions are also examined in terms of their valence – negative or positive – and arousal (similar to intensity, but in terms of how much our physiology gets excited).

There are two main brain areas involved in processing both pain and unpleasant stimuli in general are the amygdala and the prefrontal cortex. These areas don’t exclusively deal with pain but with stimuli that are especially salient to people (remember last week’s post?), and researchers are still arguing over whether particular areas are responsible for certain emotions, or whether “emotions emerge when people make meaning out of sensory input from the body and from the world using knowledge of prior experience” based on basic psychological operations that are not specific to emotions (Lindquist et al., 2012, p. 129) . I’m quoting from an excellent book “The neuroscience of pain, stress and emotions” by Al, M. Absi, M.A. Flaten, and M. Rogers.

Now researchers have, for years, been interested in the effects of emotions on pain – there is an enormous body of literature but luckily some good reviews – see Bushnell et al., 2013; Roy, 2015 ;  Wiech and Tracey, 2009. What this research shows, essentially, is that pain is reduced by positive emotions, and increased by negative emotions. Now we need to be somewhat cautious about over-interpreting these results because they’re mainly conducted in experimental designs with acute experimental pain – people are shown pictures that elicit certain emotions, then poked or zapped, and asked to rate their pain (and their emotions, usually). It’s thought that the way these emotions influence pain is via our descending inhibitory pathways. Now the situation with real people experiencing pain that is not experimentally administered is probably slightly different – a lot more salient, a lot more worrying, and far less controlled. Nevertheless it’s worth knowing that when you’re feeling down, you’re likely to rate your pain more highly. If the emotion-eliciting stimuli are particularly arousing (ie they’re REALLY interesting) then the effect on pain ratings is greater. Experimenters also found pain reduces responses to pleasant stimuli, but there isn’t such a strong relationship with negative stimuli.

The valence (positiveness or negativeness – if that’s a word LOL) activates motivational systems either pleasant = appetitive, or unpleasant = defensive. Arousal or alertness gives us a clue as to how much motivation we have to either move towards or away from the stimulus. The degree of arousal affects our pain experience – so the more negative and angry we are, we rate our pain more highly; while the happier and jollier we are, we rate our pain as less intense. BUT, as for most things in pain, it’s complex – so once we get more than moderately angry/alert/aroused, the less we experience pain. The diagram below shows this kind of relationship – from the same book I quoted above (it’s worth getting!). 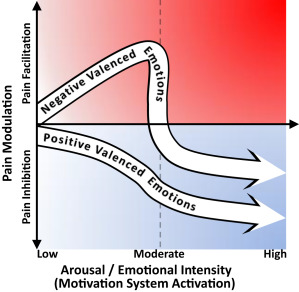 Does this mean we should freak people out so they experience less pain? Don’t be dumb! Being that alert is really exhausting. But what this diagram can explain is why some people, when they’re first attending therapy and are asked to do something out of the ordinary and just so slightly threatening (like lifting weights, or jumping on a treadmill) might report higher pain intensity – because we’ve caught them at the moderate arousal level where pain is facilitated.

Clinically, what this information means is that if we’re hoping to improve someone’s pain via pleasant or positive emotions, we’d better make sure they’re fairly high energy/arousing – a hilarious comedy perhaps – because lower intensity pleasure doesn’t affect pain much.

We should, at all costs, avoid eliciting fear and worry, or anger in the people we treat – because this increases pain intensity. This means giving people time to get used to our setting, what we’re asking them to do, and the intensity of whatever activity we’re going to do with them. In graded exposure, we should give people skills in mindfulness well before we begin doing the exposure component – because it’s likely to evoke higher than usual pain intensity if they can’t “be with” the increased anxiety that emerges during this kind of treatment.

And finally, if someone is experiencing anger, depression, sadness or anxiety – this is a normal psychological reaction integral to our experience of pain. It’s not necessarily pathological – though it probably increases the pain intensity the person reports.

I think we could promote far more scheduling pleasurable experiences as a routine part of therapy. What makes people smile, feel joy, have a good belly laugh? When was the last time they watched a comedy or joked with their family? Therapy can be fun, just see my friend Alice Hortop’s work on comedy as therapy (https://alicehortop.com/)!

Roy, M. (2015). Cerebral and spinal modulation of pain by emotions and attention. Pain, Emotion and Cognition, 35–52.

It’s been a while since I posted a Friday Funnies – my apologies. I’m happy to say that despite this lack, my sense of humour has remained intact, fed by regular dollops of my favourite cartoons from The Oatmeal (who can resist the call of “15-ish Things Worth Knowing About Coffee“, or “Ten Words You Need To Stop Misspelling“, or even “Cat vs Internet“?), and XKCD – the authors who announce the site to be

A webcomic of romance,
sarcasm, math, and language.

What’s best about XKCD is that their cartoons are Creative Commons – so I can share legally! (but not sell).

On the original site, if you hover your mouse over the second box it says “If it were anything over a 2 I wouldn’t be able to answer because it would mean a pause in the screaming.”  So true.

And my final source of glee and giggles (don’t blame me, that’s alliteration for you) is Hyperbole and a Half

Go HERE and be transfixed – I so remember this when I was a kid…These guys are also responsible for “The Real Pain Scale”.

Which all contributed to this little piece from me, so it’s really not my fault at all.  I know.  I’m just not in the same league.

I’ll be off to see the Buskers this weekend – go here if you don’t know what I’m talking about. The very best of the world’s buskers are here, and it’s awesome!

After a strenuous week (well, OK, maybe two days is not quite a week) – here’s SuperTherapist and featuring for the first time, Puddy, her cat! 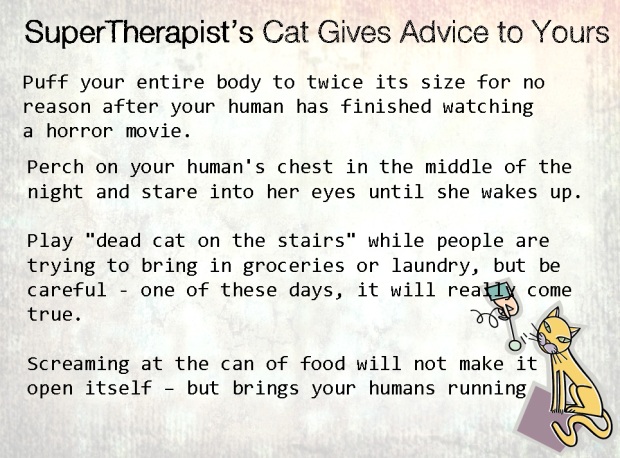 Why is it that cat’s always get the last word?

Groan-producing Friday Funnies from the whole year (I couldn’t think of a complete sentence of alliteration, OK?).

BTW many of these cartoons are created by me.  Some posts are links.  If you’d like to use some of mine, please feel free to.  If any of the artworks are, by accident, copyright, please let me know and I’ll be more than happy to amend.

Friday Funnies – quick quiz, the Best Problem Solving Strategy Ever, and how to make a meeting very, very brief

Friday Funnies – what happens when you’ve worked in pain management too long, and some wonderfu links

Friday Funnies – Super handy gadgets, and some great places on the interweb

Friday Funnies – LOLcats – and – that’s how it started

Friday Funnies – The Sloganizer! and words of wisdom about teenagers

Friday Funnies – Interpreting the moods of a cat.  Say no more!

Friday Funnies – Treatments we hope to see one day

Friday Funnies – Teamwork and a quick look at what a man should never, ever do (if he wants to live)

Friday Funnies– Parcour extreme – and no, Sheba-the-wonderdog will not be doing this any day soon

Friday Funnies – Therapeutic YouTube videos to soothe the ravaged soul, or something

Before I head out to do a little Christmas shopping – yes, in a MALL, at CHRISTMAS! I must be mad – anyway, I had to pass on the following bits of gossip.  It’s true, you heard it here first.

Have a good weekend – and if there’s no post on Monday you’ll know it’s because I’ve got LOST!

SuperTherapist decided that if she gave out any advice today, she may just need to fear for her life, so she asked me to help out. SuperTherapist may need your help to vanquish the peripheralist demons from her memory – therapeutic videos to soothe the soul.

If you haven’t heard them before – and you get a chance to see them live – just GO! These guys are at least partially responsible for the odd sounds coming from my house over the last day…

And an example of virtuosity of another kind…

After trying to come up with something suitably pithy or funny, I give up. The sun is shining and it’s way too nice to be indoors, so here’s parcour – with a twist!
Don’t do this over the weekend, you WILL break things, not a good look. And you can be sure that Sheba-the-wonderdog will NOT be doing this either – not even for food!

A cutesy animal story for Wednesday.  I am sorry about this, it couldn’t wait until Friday. 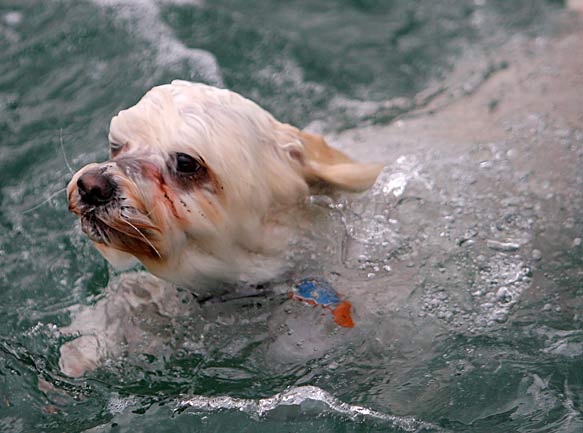 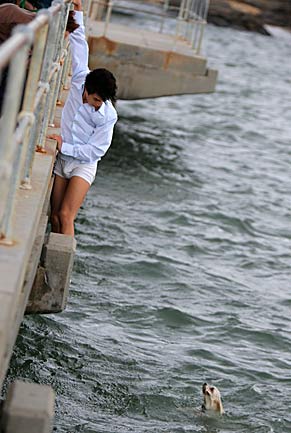 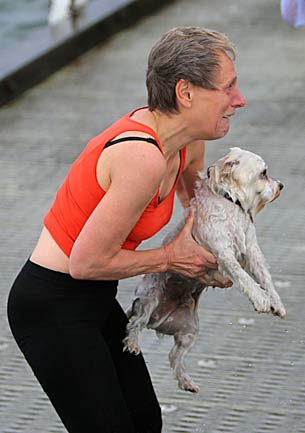 Just read on… but first, my humble and most sincere apologies to any German readers.

THE GERMAN TOURIST JUMPED IN AND SAVED THE DOG.

SHE ASKED IF HE WAS A VET?

HE REPLIED, “I’m not only VET, I’M DARNED SOAKED!”