Low back pain, despite the multitude of explanations and increasing disability associated with it, has been with humans since forever. Who knows why and I’m not about to conjecture. What’s interesting is that despite ergonomic solutions (fail), increased fitness amongst many people (also a fail), surgical solutions (fail), hands on solutions (fail, fail), and a whole bunch of “special” exercises (fail, fail, fail) we still don’t have a handle on how to reduce disability from it.

I don’t think there will be many people who haven’t seen this: 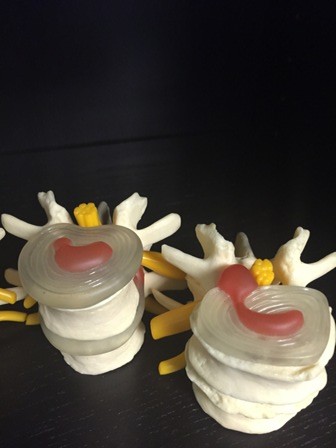 I’ve never quite worked out why, when you search for imagines of disc bulges (or rather, prolapse of the nucleus pulposus – herniated or ruptured disc was the term preferred by Mixter and Ayer (1935) who proposed the notion of disc prolapse being the cause of “injuries to the spine” (Allan & Waddell, 1989), you end up with these nasty red glowing areas (see below). I think it’s because how else do you convey the idea that this is meant to be “the source of pain”. 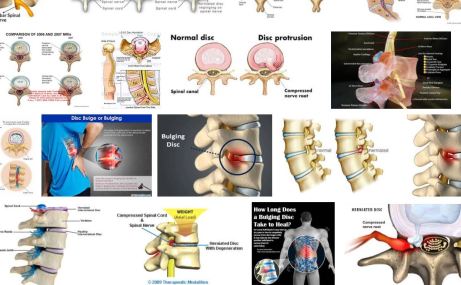 Let’s dig back a little into history. Allan and Waddell (1989) describe the “modern” concept of the disc based on four papers: Goldthwaite (1911); Middleton & Teacher (1911); Dandy (1929) and Mixter and Barr (1934). Pathologists had described the presence of these prolapses when conducting postmortem examinations – but their patients couldn’t tell them whether they hurt, and neither was there any clinical awareness of any relationship between pain and disc prolapse. In 1911, two papers described patients with massive disc prolapses – one was a fatal case of paraplegia after a disc prolapse followed by Middleton and Teacher conducting lab experiments to see whether injury (force applied to the disc) could produce a prolapse (Middleton & Teacher, 1911). Goldthwaite described a case of paresis (not pain) after manipulation of the back, presuming that a “displaced sacroiliac joint” was responsible and identified that the nerve at the lumbosacral joint could be compressed – this was supported by later authors.

Cushing, a surgeon, performed a laminectomy which didn’t turn out well – but identified that “narrowing of the canal” might be responsible for the person’s pain, and from there the disc was blamed as the cause of “many cases of lumbago, sciatica and paraplegia”.  This narrative was followed up by other clinicians, and Mixter and Barr (1934) increased the attention given to these theories. Ultimately this led to a meeting of the minds where Mixter and Barr (Mixter being a neurologist, Barr an orthopaedic surgeon) carried out an investigation into enchondromas and and normal discs. What were thought to be tumours were mainly “normal cartilage”.  Mixter and Ayer (1935) went on to pursue the idea of disc prolapse being involved in not only cases where neurological changes were evident, but also low back pain.

Mixter and Ayer (1935) found that surgical responses were not very good – while leg pain was fixed patients still complained of a painful back. Their paper, however, emphasised that lesions of the disc were caused by “trauma” (even though history of even minor trauma was only found in 14 of their 23 cases). Canny men that they were, they noted that if trauma was involved it would “open up an interesting problem in industrial medicine”: who caused the trauma?

Well, like many ideas of the time, this one took root in an exciting climate of medical and surgical discovery – detailed descriptions of the techniques and procedures used were published, but even at that time outcome measures were not reported because, in their words “the question of liability, compensation and insurance loom large on the horizon and add complications compounded to an already knotty problem”. The meme of physical trauma to the back causing disc prolapse and subsequent back pain caught hold of the imagination, and although initially diagnosed using a myelogram, very quickly became replaced (in the name of avoiding complications, cost, discomfort and potentially missing ‘concealed’ discs) by clinical history and neurological examination.

Over the years 1930 – 1950, anaesthetics and surgery became safer and more routine – and accepted, after all look at how these surgeons patched up the brave soldiers! But by the 1970’s the enthusiasm began to wane as more patients reported adverse outcomes, and continued to experience pain.  So… it was decided disc prolapses should only be surgically managed in the case of sciatica rather than simply low back pain – but what about disc degeneration? Surely that could be the “cause”! And yes, we know that even though normal age-related changes were present, these were ignored, along with the somewhat tenuous relationship between disc changes and pain… Instead cadaver biomechanical studies were used to confirm that the disc could bulge with certain forces, and because the problem was now “degenerative” there was no cure – it would ‘inevitably’ progress. Thus the surgical fusion was brought in to play to reduce the “wear and tear” on the disc to “stabilise” the joint (though instability hadn’t been found, and fusion didn’t produce great results).

What was really striking was the move during this period towards rest as treatment. Previously bonesetters (predecessors of osteopathy and chiropractic and manual medicine) manipulated and then quickly mobilised people with low back pain. The hands-on treatment provided short-term relief but the real cure was to keep doing. Orthopaedics, however, based both on knowledge of fracture and tissue healing and ongoing use of surgery for low back pain, emphasised rest to allow “inflammation” to heal. Whether there was any inflammation is moot – what took root in the minds of medical and other practitioners was the need to rest until the pain was gone.

And that, dear ones, is how the epidemic of disability (the effect on function, limitations on what people can do, on participation) was born. It’s called iatrogenesis, or what health professionals can do to increase harm, inadvertently or not. And it’s still happening today.

We should not lay the blame for ongoing harm at the feet of orthopaedic surgeons and neurologists of the day. It was a perfect storm of media attention, community fascination with technology and miracles performed as a result of the war, the heroic soldiers and their equally heroic surgeons, the courts (in the case of industry as responsible for trauma to civilians), and of course the insurers – all over the period between 1880 – and until even today.  While outcomes are being more widely reported in orthopaedic surgery (and other treatments), changing clinical behaviour, community attitudes and the legacy of our history is slow. Cognitive dissonance is a thing… and even though 1965 saw gate control theory revolutionise our thinking about the way pain is produced, the implications are not yet fully accepted.