Over the past few days I’ve been writing about case formulation because in pain management, it’s rare to find only one single causal factor that is influencing either the pain or the disability. Most times we are looking at many factors coming from all three areas of the biopsychosocial model.

In each person, the relationships between and combinations of these factors will be unique. And that’s the value of a case formulation as opposed to a diagnosis, which is more like ‘shorthand’ for a group of symptoms that go together and are supposedly linked by a causal mechanism (in the case of non-mental health problems).

After identifying stable phenomena (symptoms that are present over time and in different places), the next step is to identify the underlying biopsychosocial causal factors that produce the phenomena we see, and the relationships between these factors as they interact.

For example, inflammation is a phenomenon that is usually indicated by swelling, redness and heat in the area – the causal factors include tissue damage or pathogens, leading to the release of vasoactive amines and eicosanoids by neutrophils, and mononuclear cells (monocytes, macrophages).

In chronic pain, pain-related anxiety and avoidance is a phenomenon that is usually indicated by selective avoidance of specific movements that the person believes will either cause harm, or increase pain – the causal factors include elevated pain anxiety, catastrophic thinking, increased physiological arousal, and avoidance of the movement which serves to reinforce the behaviour through negative reinforcement. (Can you tell how much more complex the work we do is compared with the relatively clear-cut biomedical model?)

The presence of a single phenomenon rarely produces the disability we see in chronic pain, in the example of pain-related anxiety and avoidance, it is usually precipitated by an acute pain incident – maybe a ‘muscle strain’, and associated other factors such as health provider advice, family member support, media messages (have you ever gone to Google and looked up ‘low back pain’?!), and past experience.  Below is an example of some of the complex contributing factors that may be found in a single presentation.

Once this initial model is drafted, the following step is to work through the key contributing causal factors to establish the relationships between them.  Sometimes it’s possible to find one or two groups of causal factors that become ‘core’ to the presentation – these core factors can become the focus of therapy.  I’ve drawn up a very simplified version of this below. 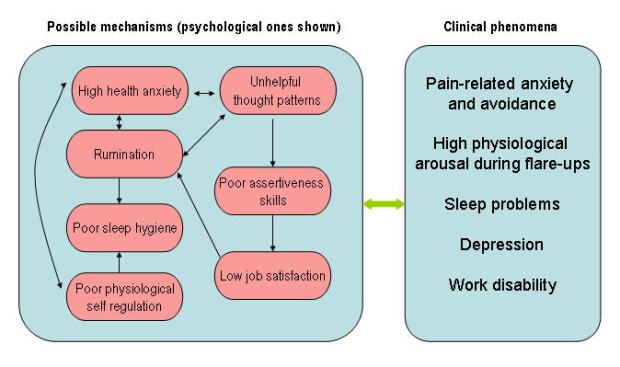 The next step is to write a description of the proposed formulation in narrative form. I’m personally not so sure that this needs to happen if it’s being used as a ‘working’ model. I’ve found that patients like the pictorial representation, and may even add additional relationships or factors as they review it.

And the final step? Evaluating the adequacy of the model – a number of other factors need to be considered, including:
Whether it is supported by empirical evidence in the literature and from experience?
How much of the presenting problems does the formulation explain?
Is it testable, or does it require a number of assumptions (such as the presence of ‘invisible’ and unmeasurable energy fields!)?