Followingon from yesterdays post – qualitative analysis of comments that rehabilitation providers made about factors they thought important and modifiable in helping an individual return to work. 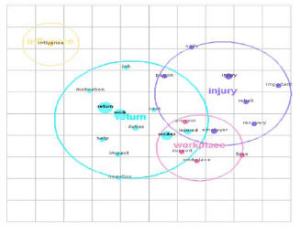 For each factor that was analysed, the participants were asked ‘how and why is this factor important?’ Using ‘Leximancer’, a text analysis software, the relationships between various terms were mapped as shown above. For example, the three main words used were ‘Return’, ‘Work’, and ‘Injury’. The frequency of each word in relation to other words such as ‘Return’ and ‘Motivation, duties, help, impact’; ‘Workplace’ and ‘support, worker, injured’; and ‘Injury’ and ‘injured, employer, person’.

The ‘Workplace’ cluster represented the need for a supportive workplace setting, or context, (‘workplace’, ‘worker’, ‘support’) and workplace involvement (‘time, ‘process’,‘employer’). This cluster of concepts was defined as a process that focussed on context, in that the workplace was a central point for rehabilitation and that a successful return-to-work would involve support for both worker and employer.

I think this would reflect most of our experience – and interestingly, this is an area not much studied in empirical studies. I expect that this is because of the complexity of the setting, and also the process focus rather than outcome focus of this aspect of intervention.

Two concepts that intersect all three clusters were ‘processes’, and ‘relationships’. This suggests that in all three areas, the way that people work together, and especially the need to follow through a series of actions to achieve the outcome. Again, neither processes nor relationships are often examined in detail in much rehabilitation research which focuses on ‘did the person return to work’?

Finally, this study analysed the ways in which the different participants classified predictors.
The following table illustrates some of the comments participants made: and agreement was not particularly high (Kappa 0.37), suggesting that different vocational rehabilitation professionals view various factors quite differently from each other. 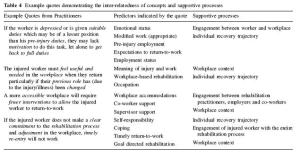 My take on the lack of agreement between professionals is that we don’t really have a common model of work disability and rehabilitation, and commonly it seems that biomedical factors receive more attention than workplace factors, and employers are often left without significant guidance for them to achieve the level of support for the injured worker that is required.

I found this study to be very interesting – and apart from my criticisms that a larger group of participants from a wider range of backgrounds would have been helpful, and the thought that it would have been great to have had the opinions of people who have been through the process, both workers and employers, it helps develop the knowledge base in an area of rehabilitation that still seems somewhat under-developed.

Of course, another criticism is that this doesn’t reflect some of the changes that occur in dynamics between injured workers and their rehabilitation and employer relationships over time – especially if their return to work is delayed, or is taking longer than anticipated. But perhaps that’s a topic for a future study.